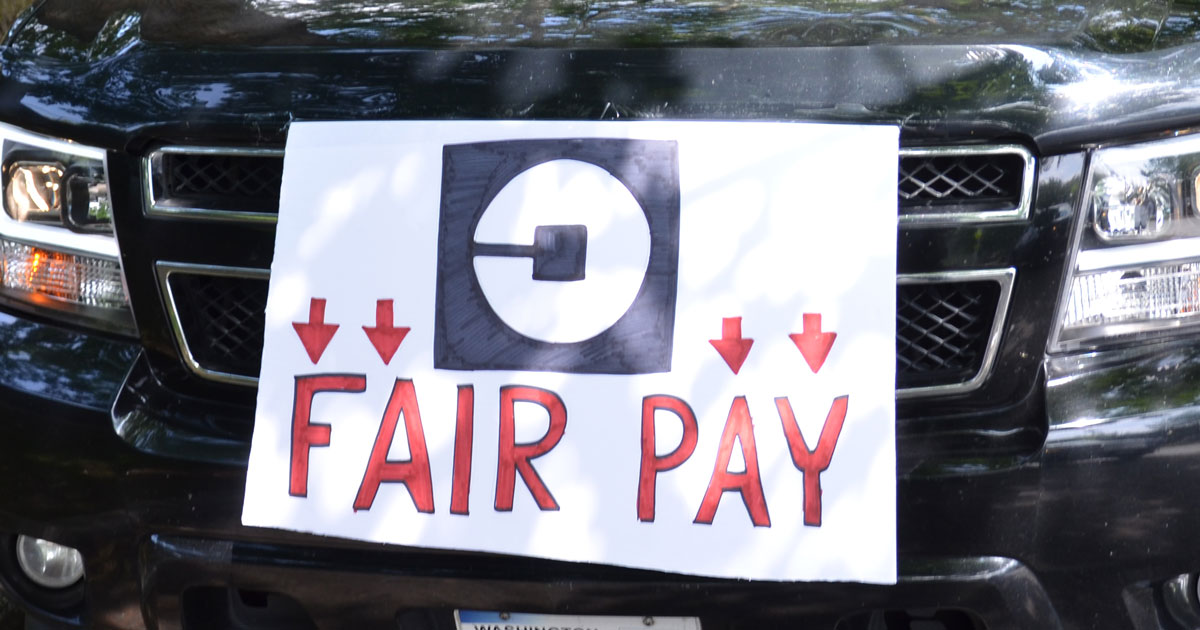 On Friday and Saturday, driver and rider email inboxes filled up with political solicitations from Uber and Lyft urging opposition to Mayor Durkan’s “Fare Share Plan.”

The Mayor’s plan would establish labor protections for drivers and fund community investments in affordable housing, transit, and driver support services with a modest 51 cent per ride fee paid by the ride-hail companies.

Drivers called the company email solicitations deceptive and insulting, and were quick to point out the hypocrisy of the ride-hail giants masquerading as protectors of driver earnings after implementing a steady regimen of pay cuts for years.

In the headline of an email on Saturday, Lyft implored drivers to “help us protect your earnings.”

“It’s insulting,” said Lyft driver Lata Ahmed. “Just a week ago, Lyft cut a tool that drivers have relied on to supplement low pay rates.  Now they think they can trick us into opposing labor protections to combat the pay cuts.  Drivers aren’t falling for it.”

Lyft is not alone in cutting driver pay.  This year alone, Uber cut pay during surge pricing in February, issued a 6% pay cut to top tier “Uber Pro” drivers in May, and wrote in filings with the SECthat they plan to cut driver pay even more to satisfy shareholders.

“When I first started driving for Uber, you could earn a decent living,” said Walt Ellis who has driven for Uber since 2015. “But over the years they’ve given us nothing but pay cut after pay cut, with a never-ending stream of one-sided unilateral decisions over every aspect of our working conditions.  So, when they asked me to contact the Mayor, you bet I did – in support of raising pay rates and passing regulations that give drivers a voice.”

Mayor Durkan’s Fare Share Plan calls for implementing a fair minimum pay standard for drivers by July 2020 that accounts for the costs of driver expenses, benefits, and all time worked.  It comes on the heels of driver protests calling attention to the issue of low driver pay.

In May, Seattle drivers delivered a report to City Hall exposing how Uber and Lyft are pocketing an increasingly greater share of rider payment in the Seattle market while drivers are earning less.

The study – Uber/Lyft take more, pay drivers less– is based on an analysis of company financial reports combined with trip-level data collected by drivers in Seattle. When Uber and Lyft first came to Seattle, drivers were paid 80 percent of what riders were charged. Today, on the median trip in Seattle, drivers received just 69 percent, according to the report published by the App-Based Drivers Association, affiliated with Teamsters Local 117.