More Than 60 Percent Of Uber Drivers Are Thinking About Quitting 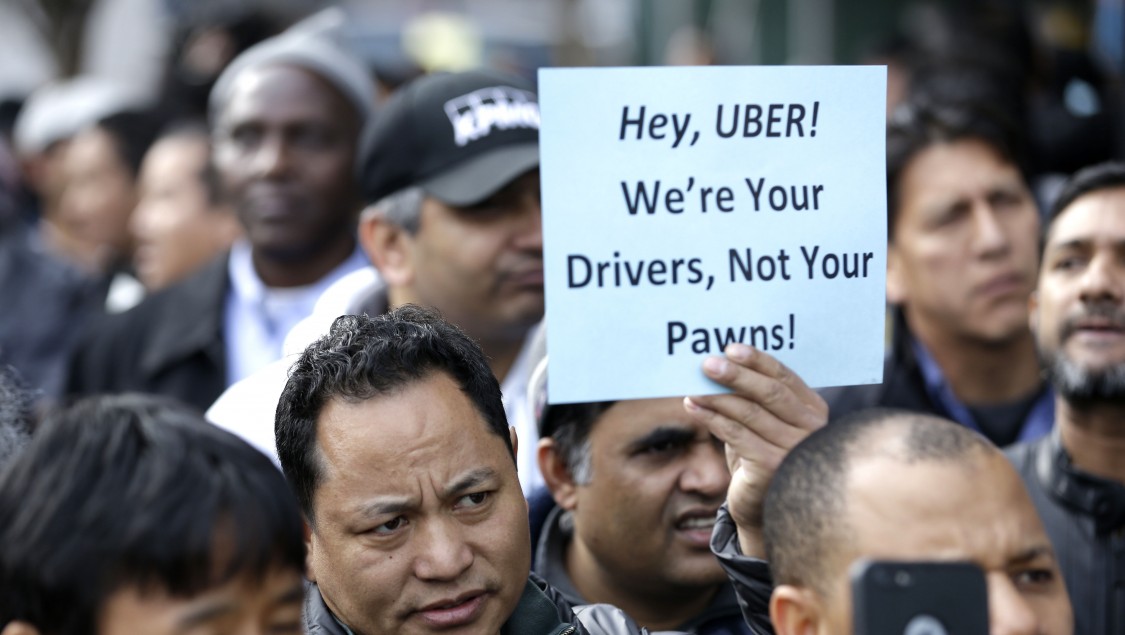 “My rent’s due and I’m struggling. I’m sweating bullets trying to make ends meet over here,” said Tanya Forister, a full-time Uber driver in Tampa, Florida. “I’ve had to work twice as hard to make half of what I used to make.”

Forister is one of hundreds of drivers nationwide protesting Uber’s fare cuts in January as a part of its “Beating the Winter Slump” campaign in more than 100 cities to increase ridership.

When Forister, a 49 year-old single mother, started working for Uber in April, it was a gift. She was making $700 to $800 a week and upgraded her car so she could take more riders using Uber XL. Things were going well.

But since the January price cuts, Forister now struggles to make $350 a week, and the 40- and 50-hour weeks she put in before don’t go as far.

“If I had the honor and privilege to get a normal job I would. I’m tired of being in the unemployment line,” said Forister, who suffers from chronic health issues, including heart failure, that require frequent hospital stays and prevent her from holding a regular job.

According to an informal survey hosted by the online platform Coworker.org, 60 percent of Uber drivers considered quitting the app due to reduced fares and 18 percent have already stopped driving for Uber. Two-hundred and sixty drivers from 63 cities were surveyed after signing the fair-wage petition to Uber on Coworker.org. The petition, which was started by Tampa-based Uber driver and protester Desmond Clark, has more than 1,200 signatures.

“I’m sending resumes left and right, as soon as I can get em out,” Julie, a full-time driver in Columbus, South Carolina who used a pseudonym for fear of retaliation, told ThinkProgress. Because of the fare cuts, “people aren’t driving, but I can’t just not drive,” she said. “Until I get another job, this is all I have.”

The 35 percent cuts have taken a serious toll, Julie said. The 57 year-old made $36 over the past three days and has been averaging about $4 an hour — after Uber takes its cut — since the company’s “Winter Slump” program went into effect. At least half of Uber drivers say the price cuts are costing them $100 a week or more in income, said Coworker’s campaign director Tim Newman.

Uber wrote in a blog post announcing the new lower fares that the move would encourage more riders to use the app while also boosting driver wages. “While pricing is a science, every city is different: different economic circumstances; different regulations; different competition…With each new test—small or large—we learn more about the choices riders make, and how those choices impact earnings for drivers.”

Drivers in Boston have seen a 27 percent hourly wage increase from 2013 to 2015, Washington, D.C. saw a 17 percent wage bump, and Los Angeles drivers got a modest 6 percent bump, according to data Uber provided to ThinkProgress.

Uber contends that if price cuts don’t work or become unsustainable, fares will return to where they were before. The company scaled back a 40 percent fare cut to 29 percent in Charlotte in 2015, and completely reversed price cuts in Seattle “because it became clear prices were low enough – and earnings have remained stable since,” an Uber spokesperson wrote ThinkProgress in an email.

But drivers are wary about the prospect of fares bouncing back once they’ve been slashed. “[Uber] keeps saying it’s temporary, but when they dropped [fares] last year, they said it was a temporary Spring special,” said Forister, referring to a 20 percent fare drop in Tampa in April 2015 that didn’t rebound. “The running joke among drivers is that it’s temporary until they lower the price again.”