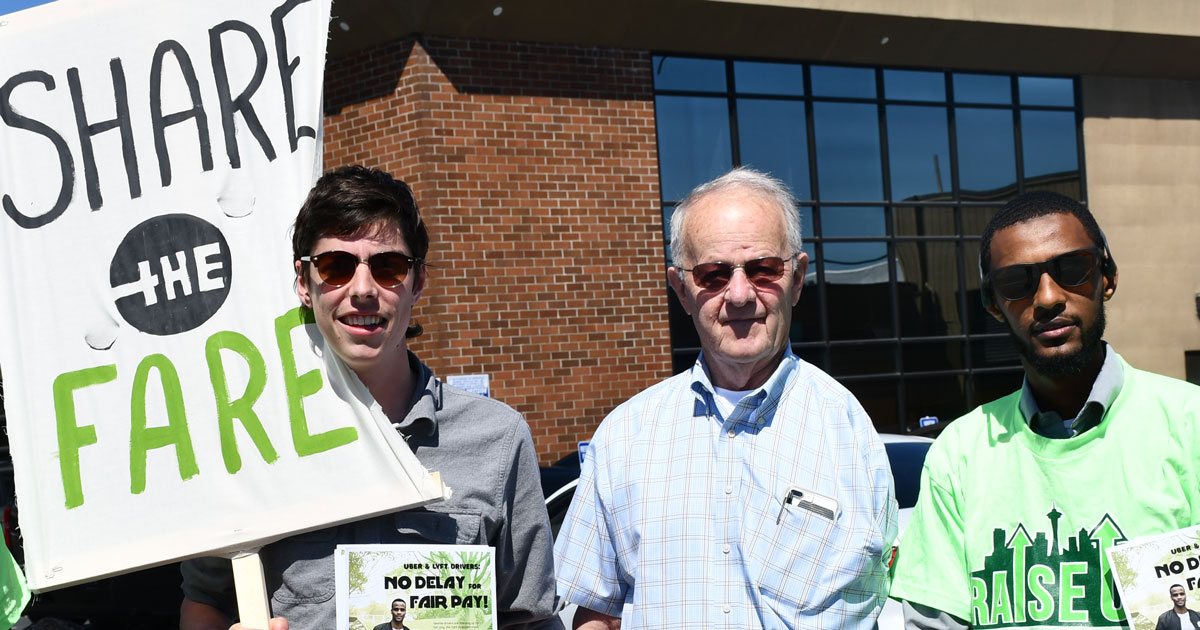 At a press conference at City Hall on Wednesday, Uber and Lyft drivers urged the Seattle City Council to support their ‘Fare Share’ priorities to establish a minimum pay standard with driver input, combat unwarranted deactivations, and fund driver support services and other community investments through a 51 cent tax on the ride-hail giants.

At the event, drivers shared stories of how declining pay, a lack of basic labor protections, and sudden deactivation without recourse has impacted their livelihoods.

“Since I started driving for Uber, my pay has been cut in half," said Sukhchain Banwait who started driving for Uber in 2013. "But while driver pay has gone down, Uber charges my customers more and more and pockets the difference. I'm glad the City is looking at establishing a fair minimum pay standard to stop the race to the bottom in driver pay."

"I'm glad the City is looking at establishing a fair minimum pay standard to stop the race to the bottom in driver pay."

According to the Federal Reserve, 58% of gig economy workers cannot afford a $400 emergency expense. This means that thousands of drivers in Seattle are one vehicle repair away from an economic crisis. Drivers are especially vulnerable when they can be wrongly terminated by Uber and Lyft without recourse.

“Many drivers are suffering from unfair deactivations, leaving us with expensive car payments but without income to support our families,” said Mohamed Aria, one of the first Uber drivers in Seattle.  “Drivers are the ones who built this business, and we deserve to be treated fairly.”

Speaking in support of the drivers’ priorities, City Councilmember Teresa Mosqueda highlighted the need for an impartial process for drivers to appeal unfair deactivations.

“I’ve heard from countless drivers who have been unjustly deactivated,” Councilmember Mosqueda said. "When you have a job, particularly a job that requires tens of thousands of dollars of investment, asking for a fair process for adjudicating deactivations is a necessary first step.”

Drivers criticized Uber and Lyft for opposing a modest tax on TNC rides to support driver support services and other community investments.

“Uber and Lyft are mass-spamming both drivers and riders, trying to convince us that the sky is going to fall if they have to pay 51 cents a trip to fund driver support services and community investments like affordable housing,” said Uber and Lyft driver Walter Ellis. “The sky is not going to fall. My passengers understand that it's not an app that drives them home at night, it's a real person who lives in our community and far too often is struggling to make ends meet because our earnings are being slashed year after year. It's time for us to come together as a community.”

After the press conference, drivers met with Seattle Mayor Jenny Durkan to discuss and ask questions about her ‘Fare Share’ plan to address their priorities. Later in the afternoon, drivers testified at a Seattle City Council Budget Committee hearing in favor of the proposal the Mayor announced last month.